Flynn works with the concept of memory in her studies, often beginning with a specific experience — either her own or inspired by a photograph. Memory is fluid; figures are intentionally kept loose and gestural. She plays with paint. Like memory, it's sometimes lush and vibrant, sometimes thin and dripping away.
Her most recent work draws attention to the American Dream: challenging us to define it. Flynn begins her figurative work by writing a word or words hundreds of times on the blank canvas. Recurrent themes are “American Dream” “Question” “Freedom” “Judgement” “Peace”. She then paints over the word- so that the initial layer of text is almost invisible- creating a push and pull between the original text and the image shown. Flynn creates paintings that use the personal to access the universal, allowing viewers to drift into an emotive sense of time and space.
"To me, art is about losing yourself and tapping into something larger- suspending time in wonder- angst- and hope."
— Caitlin Flynn

CLICK THUMBNAILS ABOVE TO VIEW A LARGER IMAGE AND PRICING INFO 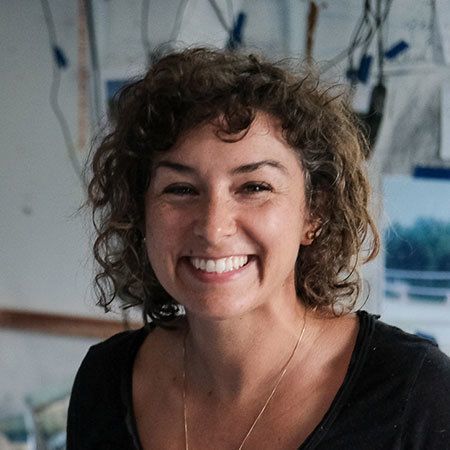 Caitlin Flynn received her BFA from the University of New Hampshire. While attending UNH she sold and exhibited throughout New Hampshire. After living and exhibiting in Santiago, Chile, Flynn moved to NYC and earned her Master's degree from Pratt Institute. She lived and exhibited in NYC for 6 years before moving to Neptune Beach, FL. Flynn currently exhibits and sells her work internationally.

"Flynn offered emotive abstract ocean scenes reminiscent of Richard Diebenkorn, as well as moody expressionist figures. She imbues all her work, figurative and abstract, with a gracefulness and painterly sensitivity." — The Huffington Post

Her work can be seen locally at Steller's Gallery in Jacksonville, FL or by private appointment in her Atlantic Beach gallery space.