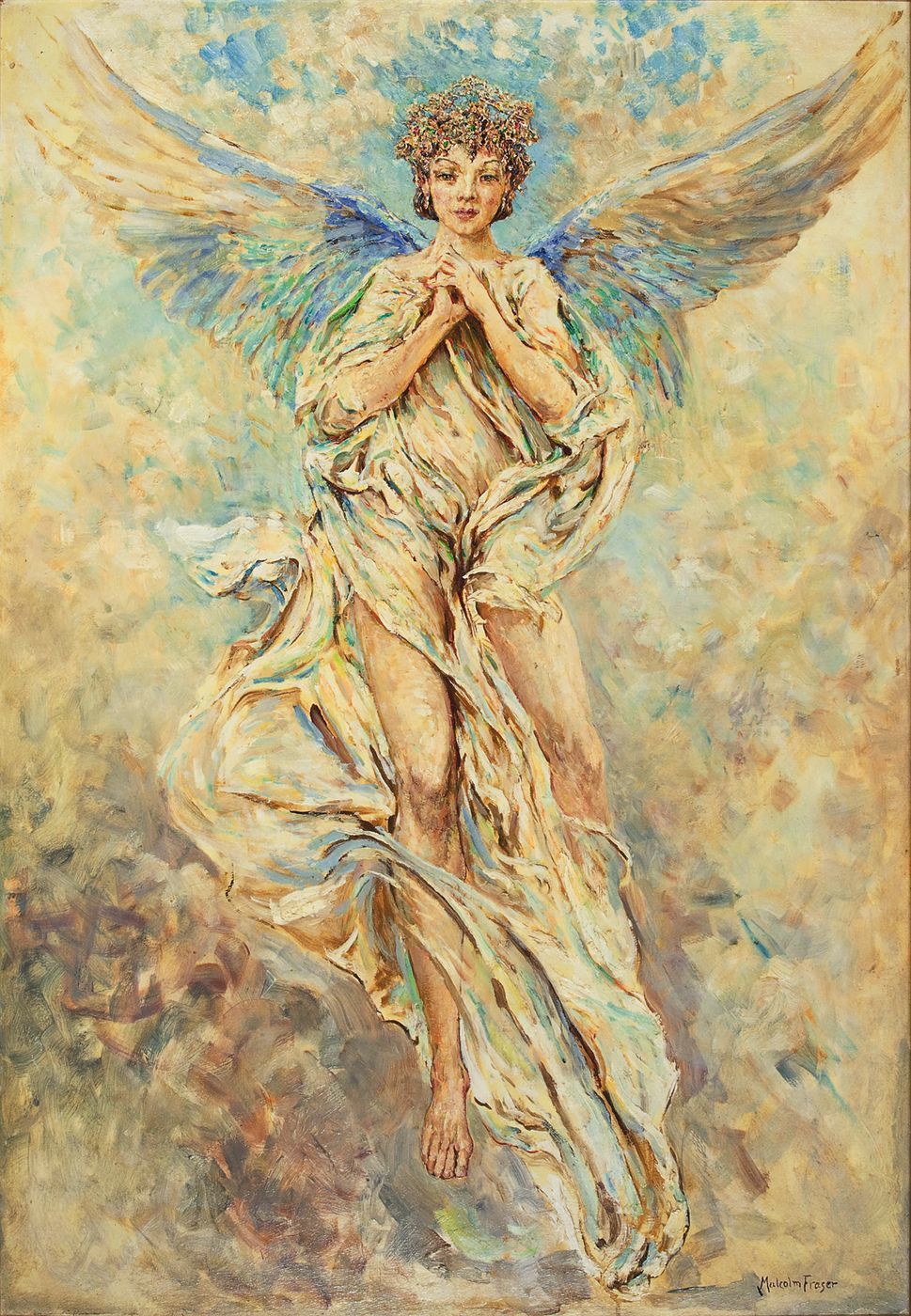 "To Whose Who Overcome, a Crown of Glory Will Be Given"
oil on board by Malcolm Fraser 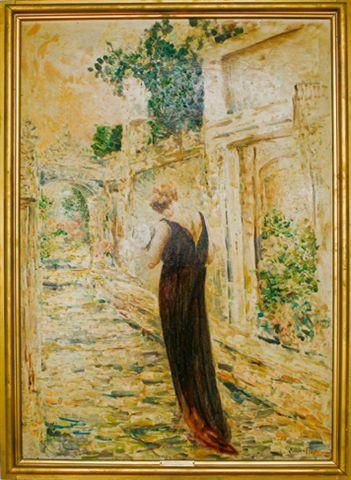 "Via Della Morta"
Oil on board by Malcolm Fraser 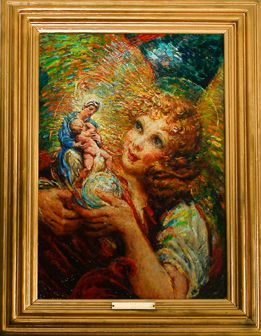 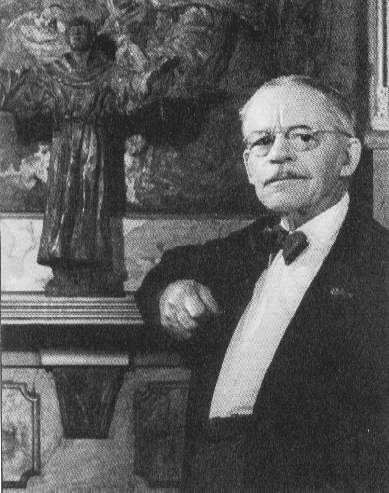 Charles Malcolm Fraser, artist and illustrator, whose long and rewarding career afforded association with many of the great names of his time, was a native of Montreal, Canada. Born April 19, 1868.

The tradition of political liberalism is a long one in the Fraser family. Malcolm Fraser’s fifth great-grandfather, Simon Fraser (c. 1667-1747), Eleventh Lord of Lovat is referred to in English histories as “The Jacobite Fox.” He was imprisoned for his political views at the age of thirteen, and at sixteen joined the insurrection in favor of King James. He was impeached for high treason for his activities in furthering the lost cause of the Stuarts. At the age of seventy-eight, he was beheaded in the Tower of London, and it is recorded that he was the last man to be the victim of this cruel form of capital punishment.

In June, 1884, at the age of 15, Malcolm Fraser graduated from Grammar School No. 35 in New York. He then entered the College of the City of New York which he attended for two years. Thereafter, he enrolled at the Art Students League. He studied under Carroll Beckwith and with Gotham Art Students under Walter Shirlaw. In 1888 he sailed for Paris to complete his education at the Sorbonne, and with study at the Académie Julien under Boulanger, Lefèbvre and Benjamin Constant, and at the Beaux Arts with Leon Jerome.

Malcolm Fraser had first come to public attention as an artist when at the age of eighteen he exhibited with the Black and White Club at the Salmagundi Club galleries in New York. The following year he exhibited at the Society of American Artists’ exhibition. He had thus begun his career with substantial work when he set out for Paris to continue his art studies. Following are some of the milestones in the course of his subsequent distinguished career as artist and illustrator. In 1892 he painted two six-foot windows for St. Luke’s Episcopal Church in the Rue Notre Dame in Paris. In 1895 he graduated from the Sorbonne in Paris, and in the same year was awarded the title of Professor of Fine Arts by the City of Paris. Also in that year, he was sent by the London “Times” to Egypt to make drawings for an archeological expedition to that country. He also made drawings for the Boulak Museum in Cairo, and was associated with Sir Flinders Petri. Also in 1895, Mr. Fraser received a degree from the famed University of Heidelberg in Germany. Although just past his twenty-sixth birthday, on his return to England he had the honor of making drawings at the home of Alfred Lord Tennyson, with the poet and his place of residence as subjects. He was associated with many of the famous personages of his period: Whistler, Monet, Corot, Sargent, the Innesses (father and son), Charcot, Petri, Rodin; Sir Henry Irving, Ellen Terry, Sarah Bernhardt and G. B. Shaw; Helen Keller and Ignace Jan Paderewski. Portraits executed by Mr. Fraser at this time included two of Queen Wilhelmina of Holland and others of the Barons Rothschild, a cardinal of the Roman Catholic Church, and other prominent figures. He also executed murals for many private homes.

In 1897, after returning to this country, Mr. Fraser became a member of the Salmagundi Club in New York, and began his career as an illustrator which during succeeding years made his name well known among readers of such magazines as the Ladies’ Home Journal, Leslie’s, St. Nicholas, Cosmopolitan, Harper’s Century and other foremost periodicals of the time. He illustrated a number of fiction works in both the short-story and novel forms. Among these were “Black Beauty,” F. Hopkinson Smith’s “Caleb West,” and Winston Churchill’s “Richard Carvel,” as well as the stories of Bret Harte. In 1908 he exhibited a series of seventeen symbolic paintings at Clausen’s Galleries in New York; and between 1910 and 1914 made a complete series of biblical illustrations for Sunday schools for the Providence Lithograph Company of Providence, Rhode Island. In 1917 he exhibited sixteen symbolic paintings at the Boss Art Gallery in New York, and the same year donated three large paintings, with poster rights, to the National Red Cross in Washington, D.C.

Mr. Fraser volunteered for service in World War I in 1917. He joined the French regiment known as the “Blue Devils.” He later served as captain on the front lines, as zone commander with the American Red Cross, American Expeditionary Forces.

In 1919 he resumed his career in America as painter, teacher and lecturer on art. From that time, he had an uninterrupted career rich in accomplishments. At various times he was identified with the advertising departments of the Vacuum Oil Company, the Standard Oil Company, and the staffs of the magazines noted above.

His donation of fifty-six symbolic paintings to the City of Ormond Beach, Florida, in 1946 prompted The Miami “News” of November 30, 1947  to state that “This $200,000 Art Gallery is the first war memorial to be completed in Florida.” This series of paintings, the central theme of which is: “Spirit is life’s only significant reality,” was presented by the artist as a war memorial to those who served in World Wars I and II.  The citizens of Ormond erected a building to house this gift, and it was known as the Ormond War Memorial Art Gallery.

Himself a veteran, Mr. Fraser had been wounded five times at the front from explosions, trench knife, shrapnel and gas. As evidence of his own extensive military record, he was awarded the following decorations: The Verdun Medal, Legion of Honor, Croix de Guerre, Cross of Malta, Jerusalem Cross, Silver Star of Belgium, The Cross of Joan of Arc, and the ribbon of the French Hospital Service with three stars. He was a member of the Veterans of Foreign Wars and the Alsace Lorraine Society. He had received the Congressional Medal of Honor for Life Saving by a special act of Congress in 1884.

The celebrated artist and illustrator died at his home in Brookhaven on June 12, 1949. He was buried with military honors.

Click HERE to view a virtual gallery of the spiritual paintings by Malcolm Fraser.

Mr. Fraser was willing to make an outright gift of a series of 56 paintings as a War Memorial to a Florida east coast city that would provide a suitable building to house the paintings, agree to maintain it thereafter and make it available to the public. Many business firms and civic-minded residents of the Halifax Area realized such a gallery would be a great asset to this community and were willing to contribute toward its development.

In June of 1946, the City Commissioners of Ormond Beach, Florida, requested and received from Mr. Fraser a six months’ option on the paintings. The Ormond War Memorial Art Gallery Corporation was duly formed with a State Charter, Constitution and By-Laws. This Corporation raised the funds necessary to build the Gallery, remodel a 1920’s-vintage frame building already on the property, and clear the land on the tract of City-owned property on Granada Boulevard between Halifax Drive and Seton Trail. It is reported that 90% of Ormond residents contributed to this project, as did approximately one hundred business firms.

The workmen for the project were servicemen recently returned from active duty and each gave one hour’s time every week toward this project. Considerable building materials were also donated.

The Gallery, including the remodeled frame building in front, was completed, all bills were paid, the pictures were hung and the dedication services were held on Sunday afternoon, December 29, 1946 — two days before the expiration date of the six months’ option granted by Mr. Fraser.

In 1962 Mr. Fraser’s widow, Mary Aldrich Fraser, donated five more of her husband’s paintings to the Museum. The entire Fraser collection now includes 66 paintings due to additional bequests from other sources.

November 11, 2008 (Veterans Day) marked the unveiling of Ormond Art Museum’s collection of Malcolm Fraser artwork, which recently was restored courtesy of Bright House Network. Malcolm Fraser’s fifty-six original paintings, the central theme of which is SPIRIT IS LIFE’S ONLY SIGNIFICANT REALITY, were presented to the City of Ormond Beach, Florida, by the artist as a War Memorial to those who served in World Wars One and Two. The series represents fifty years of work by the artist.