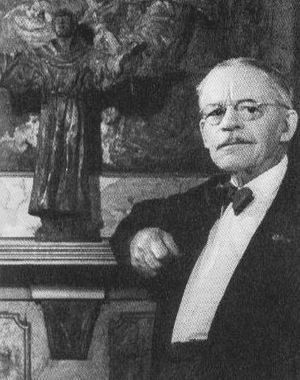 We're excited to announce our first exhibition in our freshly-renovated galleries (once we re-open) will feature more than 30 oil paintings from our permanent collection.

This special Malcom Fraser Exhibit will be sponsored by AdventHealth. As we get closer to the Museum building re-opening, we felt now would be the perfect time to take a look back at both the art and the artist that started it all back in 1946.

At the conclusion of World War I, Fraser returned to America to paint, teach and lecture on art. He resided in Brookhaven, NY, and Florida, where he painted portraits of guests at the Ormond Hotel and Henry Flagler-owned hotels. He amassed a collection of his personal work signifying that "Spirit is Life's Only Significant Reality.” Fraser offered that series to any museum along Florida’s East Coast, and Ormond Beach and her residents rose to the occasion! Local citizens, headed by Eileen Butts and Thomas Coyne, raised almost $10,000 to start an art museum that paid tribute to those who had served in World Wars I & II. The City of Ormond offered the land and small cottage, and the vision began to take shape. Many local servicemen who had recently returned from service in World War II volunteered an hour a week to help build the facility. Land was cleared, and four main galleries were built to house the collection, and the lush Memorial Gardens were begun. The Ormond War Memorial Art Gallery & Gardens were officially dedicated on December 29, 1946, and was renamed as the Ormond Memorial Art Museum & Gardens in 1987.

"The time is coming and coming rapidly when there will be no more war. With the barriers of distance disappearing with the introduction of our modern devices of fast transportation and easy communication must come an era of closer co-operation between men and countries. What was once labor is becoming an engrossing intellectual procedure calling each day for a better mental and spiritual development, more tender care, more love, an era of building. This is PEACE."

"Peace" is one of the 56 oil paintings in the Malcom Fraser permanent collection, which established our museum in 1946. The series includes work by the artist created during an almost 50-year span, with some pieces dating back to the late 1890s and early 1900s. The narrative description above appeared in the original catalogue and is in the artist's own words.

The public will be able to view this painting in person once again when our museum building re-opens as part of a special Malcom Fraser exhibition sponsored by AdventHealth Daytona Beach. It'll be the first show in OMAM's freshly-renovated galleries. Exhibit opening date is still TBD! #FraserFridays

Malcolm first came to public attention as an artist at 18 when he was selected for the Black & White Exhibition at The Salmagundi Club in Greenwich Village, New York. The following year, he exhibited at the Society of American Artists’ exhibition. He had thus begun his career with substantial work when he set out for Paris to continue his art studies. In 1895, he graduated from the Sorbonne in Paris, and in the same year was awarded the title of Professor of Fine Arts by the City of Paris.

Since this week's #FraserFriday falls on #GoodFriday, we thought it was a perfect opportunity to feature Malcom Fraser Permanent Collection painting #42, "The Builders." The narrative description below appeared in the original catalogue and is in the artist's own words.

The public will be able to once again view this painting in person when our museum building re-opens. That exhibit, which is sponsored by AdventHealth, will be the first in OMAM's freshly-renovated galleries (May 16 - June 5, 2022).

In honor of both #FraserFriday and #EarthDay, we're highlighting the first painting of the Malcolm Fraser Permanent Collection, “The Waters Covered the Face of the Earth,” (oil, 27x21).

The public will be able to once again view this painting in person when our museum building re-opens. That exhibit, which is sponsored by AdventHealth, will be the first in OMAM's freshly-renovated galleries (May 16 - June 5, 2022)

This week’s #FraserFriday post is extra special! Yesterday, we saw the return of our beloved bronze peacocks made by sculptor Mary Aldrich Fraser in memory of her husband, Malcolm Fraser. The memorial was unveiled on March 5, 1950 during the dedication ceremony. This video starts with a few mementos from that day 72 years ago, followed by a time lapse showing the pretty patina peacocks being placed back in their pond. We are also SO VERY EXCITED to announce that our renovated museum building we will re-open to the public on May 16, 2022! That date will also be the official opening to our Malcolm Fraser Exhibit presented by AdventHealth Daytona Beach.

We've been so busy getting ready to reopen on May 16th that I almost forgot to post this very special #FraserFriday video made with the help of our very good friends at Frame of Mind! As we've mentioned before, artist Malcolm Fraser was a World War I veteran who served with the French regiment known as the Blue Devils. He was wounded five times at the front from explosions, trench knife, shrapnel and gas. As evidence of his own extensive military record, he was awarded the following decorations: The Verdun Medal, Legion of Honor, Croix de Guerre, Cross of Malta, Jerusalem Cross, Silver Star of Belgium, The Cross of Joan of Arc, and the ribbon of the French Hospital Service with three stars. He was a member of the Veterans of Foreign Wars and the Alsace Lorraine Society. He had received the Congressional Medal of Honor for Life Saving by a special act of Congress in 1884. Fraser's WWI medals (now in a fresh new frame) and his helmet, along with many of his oil paintings from our permanent collection, will be on display for the public to view when we re-open in just 10 days! This special exhibit, which is sponsored by AdventHealth Daytona Beach, will be up through June 5th.

As we approach Memorial Day, we remember those in military who paid the ultimate sacrifice while fighting to protect our freedom. Our museum was founded in 1946 with a permanent collection of oil paintings from artist Malcolm Fraser, gifted with the agreement that an art museum would be created to pay tribute to veterans.

For the final #FraserFriday post during our Malcom Fraser Exhibit run (May 16 - June 5, presented by our friends at AdventHealth Daytona Beach), we are highlighting painting number 17 in our collection. The narrative description below appeared in the original catalogue and is in the artist's own words.